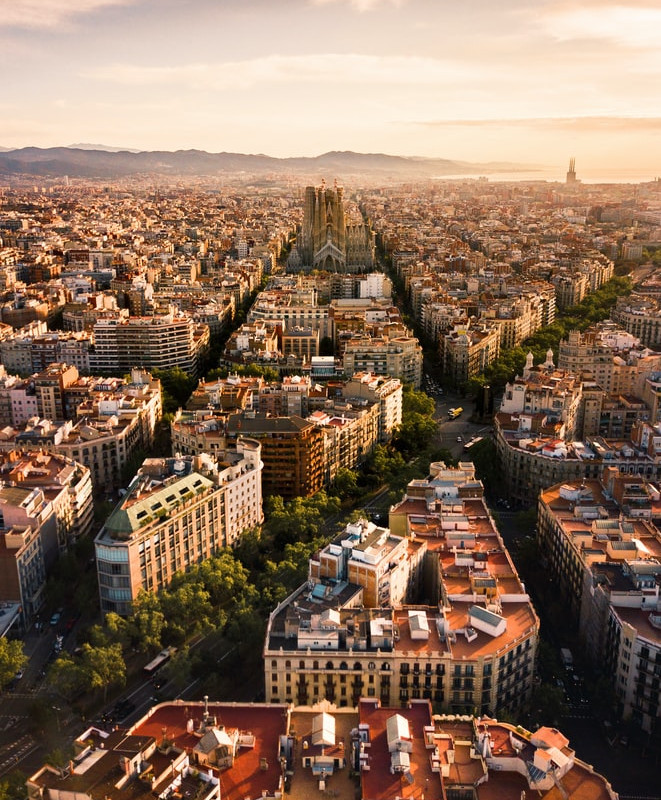 Barcelona, famously known as one of the most cosmopolitan cities in Europe, is a popular destination for international students and young professional expats. The city is divided into several neighbourhoods within ten different districts, each offering a unique approach to life in the city. So to answer the question of where is the best place to live in Barcelona, we must first identify the district/neighbourhood that best fits the lifestyle you are looking for.

Barceloneta, home to the famous Barceloneta Beach, used to be occupied by fishermen and working class locals. Nowadays, it is one of the most popular neighbourhoods in Barcelona, especially during summer when tourists flock to the beach. If you are looking for a laid back lifestyle and don’t mind living in slightly smaller and older flats (as they often tend to be), Barceloneta may be the place for you. You’ll feel like you are in a small lively fishing village, slightly isolated from the rest of the city but still well-connected thanks to the nearby public transportation.

While the area is still considered to be pretty safe, make sure you keep an eye on your belongings when you go to the beach.

Up until the late 18th century, Gracia used to be a separate city from Barcelona until Eixample was developed to connect the two together. Nowadays, it is slowly becoming one of the most desirable neighbourhoods among young families and artsy, alternative young individuals. The array of residents is quite diverse: here you’ll find a mixture of older Catalans, young working expats and hipster individuals. It is also known as one of the ¨coolest¨ neighbourhoods in Barcelona as there are many terrace cafes, chic boutique stores and great bars.

If you want to immerse yourself with the locals, learn some Catalan and avoid selfie sticks, then maybe you should take a closer look at Gracia.

El Born neighbourhood is part of Ciutat Vella, the old city of Barcelona, and is one of most historic areas in Barcelona. Life in El Born is never boring, this is why many expats choose to live here. It is located inside the bustling city center and is home to many local businesses, boutique shops, art galleries, restaurants, and cocktail bars.

If you are someone who loves to be in the center of a lively and active neighbourhood and don’t mind sharing it with the tourists in summer then El Born might be the place for you.

For the social butterfly: Eixample (District)

Eixample district (pronounced “eh-sham-plah”) is one of the most well-connected and central areas to live in Barcelona. Eixample consists of 6 neighbourhoods in total and is divided into Esquerra (left) and Dreta (right) by Passeig de Gracia, one of the most expensive shopping areas in Barcelona.

Eixample is home to some of the city’s best modern architecture such as Casa Batllo, Casa Mila and Casa Amatller, it is also home to some of the most visited tourist attractions, such as Sagrada Familia, Arc de Triomf, National Theatre of Catalonia and many more.

You can also find many upscale bars, nice restaurants and great brunch spots thanks to its dynamic dining scene. One of the most famous streets for food and drinks is Enric Granados (named after a Catalan pianist-composer) where you will find many cafes, restaurants and bars packed with people at night.

Fun fact: Our Home Fetch office is located in Eixample on Carrer Roger de Lluria so we could be a bit biased when we say our favorite neighbourhood in Eixample district is Eixample Dreta.

For the student on a budget: Sants (neighbourhood)

Sants is one of the 8 neighbourhoods that make up Sants-Montjuic and is famously known for the main train station (Sants Estación) which connects Barcelona not only to the surrounding cities in Catalonia but to other regions in Spain and even France.

Sants can be a good place to live if you are a student since rent around the area are more affordable and it is close to many universities and business schools. However, while the area has many advantages, we should note that lower rents bring slightly older and less charming buildings.

Sants is a great place to go strolling, walk your dog or just hang out in one of its surrounding parks.

Browse through a selection of mid-to-long term properties for rent in Barcelona.